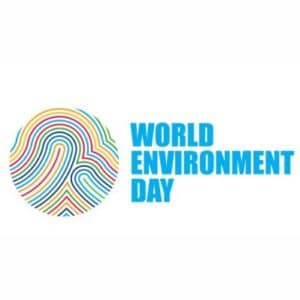 What is World Environment Day?

A Platform for Action
World Environment Day is the UN’s most important day for encouraging worldwide awareness and action for the protection of our environment. Since it began in 1974, it has grown to become a global platform for public outreach that is widely celebrated in over 100 countries.

The People’s Day
Above all, World Environment Day is the “people’s day” for doing something to take care of the Earth. That “something” can be focused locally, nationally or globally; it can be a solo action or involve a crowd. Everyone is free to choose.

The Theme
Each World Environment Day is organized around a theme that focuses attention on a particularly pressing environmental concern. The theme for 2018 is beating plastic pollution.

The Host
Every World Environment Day has a different global host country, where the official celebrations take place. The focus on the host country helps highlight the environmental challenges it faces, and supports the effort to address them. This year’s host is India.

Registration
In recent years, millions of people have taken part in thousands of registered activities worldwide. Please sign up so we can keep you updated on various activities.

Since its beginning in 1974, World Environment Day has developed into a global platform for raising awareness and taking action on urgent issues from marine pollution and global warming to sustainable consumption and wildlife crime. Millions of people have taken part over the years, helping drive change in our consumption habits as well as in national and international environmental policy. Below are some of the landmarks of World Environment Day through the years.

World Environment Day embraces smaller and less-developed nations while tackling even bigger topics: from sustainable consumption to the illegal trade in wildlife. The annual day of action that began more than 40 years earlier goes viral on social media.

PROTECTING RHINOS AND OTHER ENDANGERED SPECIES FROM THE ILLEGAL TRADE IN WILDLIFE
WERE THE FOCUS OF WORLD ENVIRONMENT DAY 2006.

“I’m with nature” is the theme of World Environment Day 2017, which inspires more than 1,800 events, from tree-planting in Mumbai to ivory burning in Angola to a running race through Brazil’s Iguaçu National Park. In host country Canada, Prime Minister Justin Trudeau joins UN Environment’s Erik Solheim to connect with nature by paddling kayaks along the Niagara River.

The day is a springboard for #WildforLife, UN Environment’s biggest-ever digital campaign and a major push to counter international wildlife crime. Host country Angola promises to curb the trading of elephant ivory. China, a key destination for illegal wildlife products, subsequently pledges to close down its domestic ivory market.

The theme “Raise Your Voice Not the Sea Level!” builds awareness of the dangers facing island nations from climate change. The next year, small island states secure agreement at the Paris climate talks to pursue the ambitious goal of limiting the increase in average global temperature to 1.50C.

Hosted by Mongolia, this year’s theme is Think.Eat.Save. The campaign addresses the huge annual waste and loss of food and aims to empower people to make informed choices to reduce the ecological impact of food production.

People around the world register more than 4,000 activities (in 2011) and visit the World Environment Day website more than 4.25 million times (in 2012); the Arab world and the United States play host for the first time;  the day draws attention to climate change for three years straight.

The theme “Melting Ice? – A Hot Topic”, hosted by Tromsø, Norway,  marks the first of three consecutive years in which the day draws attention to climate change, just as the Fourth IPCC Assessment Report states that warming of the climate is unequivocal.

A decade after the UN Convention to Combat Desertification entered force, World Environment Day delivers a reminder of the pressures on drylands when Algiers, Algeria hosts the celebrations under the slogan “Deserts and Desertification – Don’t Desert Drylands!”

World Environment is held in North America for the first time, with San Francisco hosting hundreds of events around the theme “Green Cities: Plan for the Planet.” Its profile in the year the Kyoto Protocol comes into force is lifted by the participation of former US Vice-President Al Gore and former Mayor of San Francisco Gavin Newsom.

The main celebrations take place in Beirut, Lebanon, a first for the Arab world. The theme of “Water – Two Billion People are Dying for It!” is chosen in support of the International Year of Fresh Water.

CLIMATE CHANGE, INCLUDING THE THREAT FROM RISING SEA LEVELS TO AREAS SUCH
AS THE MEKONG DELTA, HAS BEEN THE MOST-VISITED THEME
OF WORLD ENVIRONMENT DAY.

Secretary General Kofi Annan chooses World Environment Day to launch the Millennium Ecosystem Assessment, an unprecedented effort to map the health of the planet. Reflecting the theme “Connect with the World Wide Web of Life,” the international festivities take place across several cities: Torino, Italy and Havana, Cuba as well as in Hue, Vietnam and Nairobi, Kenya.

UN Environment launches a fully developed World Environment Day website, making it easy for people around the world to register their activities and build a sense of global community. The main events take place in Adelaide, Australia under the theme “The Environment Millennium – Time to Act,” ahead of the international summit that sets out the Millennium Development Goals.

World Environment Day highlights threats to our marine ecosystems for the first time, using the theme of “For Life on Earth – Save our Seas” in support of the International Year of the Ocean. Moscow, Russia, hosts the celebrations.

Nigerian activist Ken Saro-Wiwa receives a posthumous Global 500 award during WED celebrations in Ankara, Turkey. With the award, World Environment Day throws a spotlight on the link between human and environmental rights.

China hosts World Environment Day in Beijing, raising environmental awareness in the world’s most populous nation, under the theme “Poverty and the Environment – Breaking the Vicious Circle.” The event returns to China in 2002, hosted by the city of Shenzen.

World Environment Day is held in Rio de Janeiro, Brazil, during the UN Conference on Environment and Development, better known as the Earth Summit. Nations negotiate landmark treaties on climate change, desertification and biodiversity, and set the course for contemporary sustainable development.

A year after the establishment of the Intergovernmental Panel on Climate Change, celebrations hosted by Brussels, Belgium echo mounting concern about global warming. The theme will be re-visited more than any other in subsequent World Environment Day campaigns.

The main celebrations begin to rotate around the globe, starting in Bangkok, Thailand. The theme of “When People Put the Environment First, Development Will Last” comes a year after the Brundtland Report laid out its influential blueprint for sustainability.

UN Environment marks the day at its headquarters in Nairobi, Kenya, by presenting the first of its Global 500 awards to environmental champions including Wangari Maathai. The awards become a mainstay of World Environment Day celebrations through 2003.

The theme “A Tree for Peace” coincides with the International Year of Peace. Reflecting World Environment Day’s growing profile, political and religious leaders including French President Francois Mitterand, Indian premier Rajiv Gandhi and Uganda’s Yoweri Museveni take part in a “Global Ceremony” by planting a tree and stressing the links between conflict and environmental destruction. 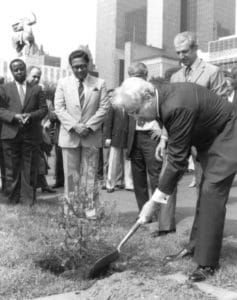 UN designates 5 June as World Environment Day in 1972; two years later, the day is celebrated for the first time under the slogan “Only One Earth.”

The campaign draws attention to toxic chemicals in groundwater and food chains. The next year, UN Environment’s Governing Council adopts the Montevideo Programme, setting priorities for global lawmaking that lead to major international agreements restricting or eliminating an array of hazardous chemicals and pollutants.

The theme “Only One Future for Our Children” coincides with the International Year of the Child. For the first time, World Environment Day echoes a UN-designated international year, a trend that grows as environmental problems rise up the global agenda.

UN Environment uses the day to highlight concern about the ozone layer, setting a trend for World Environment Day to generate vital early momentum on critical environmental issues. It takes another ten years to seal the landmark Montreal Protocol on Substances that Deplete the Ozone Layer.

World Environment Day is celebrated for the first time with the slogan “Only One Earth.”